At least for those who know about. What's that? Basically a bike ride across Finland. In autumn to be precise, generally from somewhere south to somewhere very north. And what does "Ruska" actually mean? Well: ’Ruska’ translates to autumn foliage and that is the most beautiful time of the year to be riding across Finland.

After the third time now it seems fair to put down a few words on why and how. (before Mikko makes it mandatory that you have to write one word per km ridden)*. I somehow enjoy riding a bike for few days a bit longer since I ended up being not so bad at it. After that nearby kill just before TransAm2015 it took me a while to figure out if and where I would ride again any event. A few years went by without much hunger to do so. I moved, joined another company, wrapped my head around other things for a while. In between the whole cycling-thing became huge. "Races" appeared here and there, everyone seemed busy to shiny up their insta. Glam pics with the must have of all those goodies you would definitely need. To be considered as the up-to-date-long-distance-cyclist. To make sure you get all the kudos from your hood. Whoever wasn't into gravel or any coffee-ride-community had to put his name on at least one of those many races. For the industry it was springtime on another next-to-gravel-playground. And within a second you would end up spending hundreds of euros to sign up for something. The media played their part, the organizers, the industry. The so called unsupported bike race thing was not the next big thing anymore.

I couldn't make up my mind to sign up for branded checkpoints and page long fine prints about rights on pictures of participants. The whole unsupported cycling thing went quickly towards the usual (insert any sport) full of ads. Second thing which didn't turn me on was - nearly none of those events come without a fixed route. A thing I was already uncomfy when I went to Astoria in 2015. So what's the point of letting everyone just ride the same predefined roads? Is it because whoever is organizing this wants to make sure that their definition of where to ride is the only valid, correct one? It cuts out a whole lot of the "you are on your own" or "it's the complete package of your decisions, even those you made months and weeks before the start". There is so much more in this than just the "one perfect route" - there are many. For everyone there is a different perfect one. And even each single person can come up with a few options - to be picked when out there on the road. It's some sort of chess game in the end. And I grew up playing chess.

Second thing I did not like - blown up rule books. You can come up with pages full of rules, descriptions and definitions plus a fixed route which has to be followed. Or you just leave it to the very few basic rules. If any event gets so big, that you will likely need a rule book with few pages plus few people constantly trying to follow up just to make sure participants are sticking to those rules - you better shrink the whole thing down. Where does it come from in the end? That people are trying to cheat and not even follow a hand full of rules in a way that you implement tons of them? Simply - fame. Fame the organizers want to create, the checkpoint sponsors are eager to use for marketing purposes, the participants want to get rewarded for on social media. As a result you'll see a lot of people on the start line of a race who are just too well prepared on the wrong end of the story but not even willing to actually race. More influenced than self-prepared. But hey, as long as they pay their starters fee...

All in all, there was not much that could make me think of doing a TCR again or any fixed route event. The happier I was when Mikko came up with the idea of Ruska in 2017. Following the colors of the autumn foliage from south to north in (mostly) Finland - wow! I've been to the North Cape in 2008 with my good old trekking bike, mostly trough Sweden and then we cycled around the Baltic Sea in 2012. So yes, Scandinavia again, Finland?! A start, a finish, a few checkpoints in between and maybe one or two mandatory courses? I mean, look at the map. It's huge, it's a lot of nothing. A country sitting in the upper right corner of Europe next to Russia, you don't end up there accidentally often. Just look at the manual, all these "promises" - northern lights, nearly no rain.... After 2017 went by and from what I saw then, I definitely would join in 2018. Thus, I spent quite a while in route planning, trying to figure out the basics of opening hours for shops and gas stations up there. It was nice to get excited again after all. Not so much in terms of "signing up for a race" - which it is not. It is a ride, and the more I was digging into the details I was quite happy about it. To take away that particular label it became more open on what you would like to make it in the end. You could could ride it in a way that would not be short of calling it hard, but you could also just challenge for finishing it at all. There was no particular glory for the fast ones but also no less for the last finisher.

The good thing is, there's a ferry going every day from Travemünde to Helsinki. So getting there is a piece of cake. Having 30h of rest, eating buffet meals all day and calming down (hopefully). Start was in Turku, so easily to do by train. I spent a bit time strolling around, taking pictures and trying to calm down. I stayed in a little hotel downtown and checked out a bikeshop in the morning. The weather forecast was promising on rain and somehow I did not put on mudguards at home. So I bought some and went to the shop for installing them properly. Oh, these nerves.

Each year the ride got more or less a specific theme as a common thing regarding the checkpoints / controls. In 2018 the route was following from Turku to Kuolema, Salla, Esrange to the finish in Kilpisjärvi:

Fun thing each year - there is a quiz about these locations.

Use a hashtag, they said. #Ruska2018 pic.twitter.com/T1dg2IzPNZ

In the end it still went well enough to finish 2nd. Really nice when u got a bit spare time to relax and enjoy the place. I got myself a small cabin, had a sauna and time to eat and sleep. 2.043km and a lot of things learned. 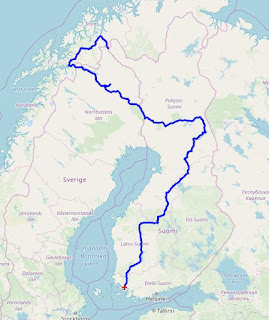 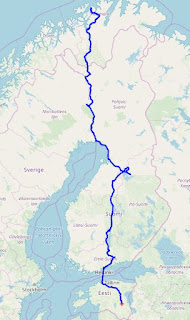 I don't know exactly why but for some reason I had booked a cabin at Olos for 3 nights, starting that exact day I finally finished. Maybe it had to be like this. There was a place I knew would have a sauna and should have some decent food as well. I gave them a call and asked if they could prepare 3 times burger+fries, a salad and 3 beers. I probably would not fit well into the restaurant the way I would look or smell. Cruising these last few meters to the ski resort, trying to soak up what was left from that day. I had sent some stuff directly over there and it all was just perfect. Cold beer, warm food, hot sauna. Phew.
So far I've done quite well as in the years before. Well enough to allow for some time to rest and relax before the get together on Saturday evening. The more I respect everyone arriving there, sometimes just with hours or minutes left before midnight. They all had been out there for so many more hours.
I was totally uncertain about how I would manage this year. There was some backup idea prepared. If I would need to go easy I would really just try to save a bit here and there and just try to finish in time. And then ride back home through Sweden. Some holidays on the bike. But it all went too good from the beginning. Even with the shitty third day I could make it a better ride compared to the previous editions. Better in terms of riding efficient, focusing on progress, not wasting time. I wouldn't say that I was physically better prepared this year, maybe even a bit worse? It was more a result of having done Ruska before. I think I learned a bit in the years before. There is no guarantee that things turn out the way you want them to, you also need a bit of luck. With some sleep and time I started to feel that it had taken its toll on me. Would it be good to try and ride another 2.300+km? Maybe it would have worked out if I had continued directly next day. What for, exactly? Short - with ~40% of the starters dropping out there was enough space on the bus to Rovaniemi as well as on the train to Helsinki. To easy not to go back home this way without having to fly.
So what do I take away from that? I really don't know yet. Some kind of confidence I guess. Another round of learnings. Less pictures but memories instead. As before, most things will need some time to lead to a conclusion. I needed quite while to process the previous rides, the impressions. It is all just so compressed into such short time. Looking back I could start finding those points where I could have done better. But for now I allow just to be happy about it. It took me quite a while to learn again to actually enjoy any achievements. I'm quite thankful for that. One big difference compared to the years before was definitely my sleep. At no moment I was tired as back then. I would also say I got more sleep than I would have needed. Maybe just a result of my conservative thinking - better this than the other way round.
So, what's next?, one could ask. How about #ruska2022?

I really don't know. At one hand I would love to finally try to make use of all those years with painful Russian language courses at school, on the other it is maybe time to give it a break and just ride the trekking bike, with tent and camping stove next holidays. The pictures and videos I found online of the Russian checkpoint are a little bit frightening but same time tempting. I won't be able to make it a last minute decision again since I'd need to get a visa for entering Russia. And still - Covid won't magically disappear until then. As before, I also would need to make sure not to ride too many known roads. That would probably already be a bit of a challenge. 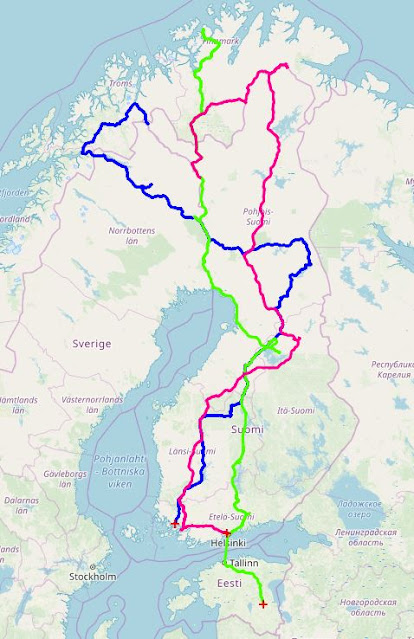 *if I count correctly, there are now enough words to ride two more times Ruska in case Mikko implements the one-word-per-kilometer-to-be-posted-rule
@ 22:11
Teilen